How to Create Logical Volumes and Filesystems – Linux Hint

Logical Volume Management, or LVM, is a system used to manage logical volumes and filesystems. LVM has much more advanced features than the other volume management tools (like gparted) used to divide a disk into one or more partitions. In order to play around with LVM, we need to have concepts about the following terms.

Logical Volume is the equivalent of disk partition conceptually in a non-LVM system.

File Systems are created on logical volumes, and after creating file systems, we can mount these filesystems on the machine.

This tutorial will use lvm, an apt package, to create logical volumes and filesystems.

After installing, check the version of lvm to verify the installation. 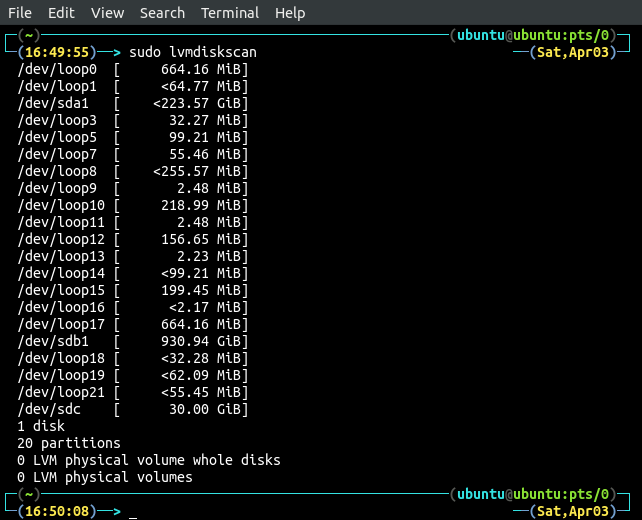 Now initialize the block device as a physical volume using the pvcreate command.

There is no volume group on the machine, so create a new one from the physical volume (/dev/sdc), which we just created in the previous step. The vgcreate command will be used to create a volume group.

The above command will create a volume group (vg01) from the /dev/sdc physical volume.

NOTE: We can create a volume group from more than one physical volume by using the vgcreate command as follows.

Now again, display all the volume groups using the vgdisplay command, and the recently created volume group vg01 will be listed there. 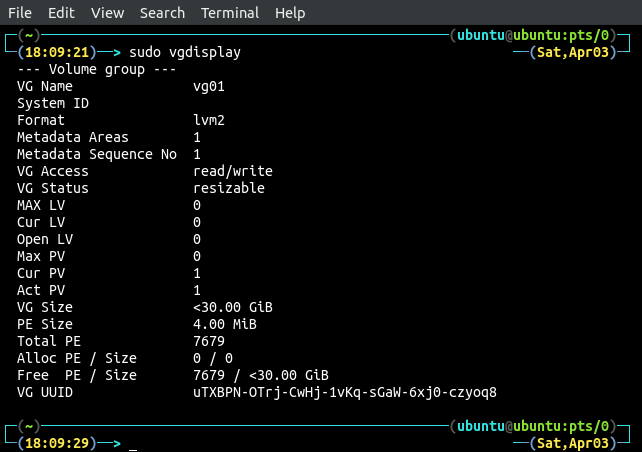 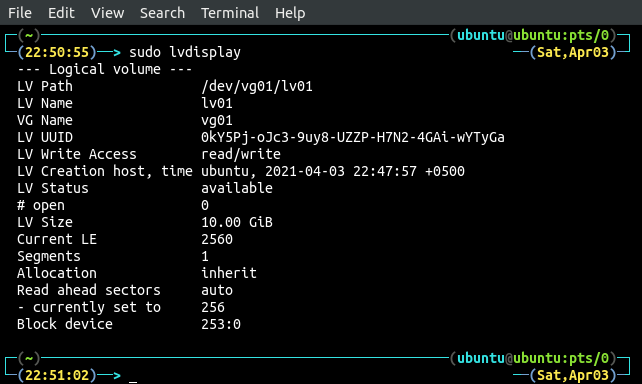 After creating the filesystem, mount it on a directory to access it. Create a directory ‘/media/$USER/lv01’.

Mount the filesystem on this directory using the mount command.

After creating and mounting the filesystem, we can use different commands like fdisk, df, or lsblk to display the file system.

So far, we have used lvm through the command-line interface, but there is a graphical tool (kvpm) available used to create logical volumes and filesystems using a nice graphical user interface. Install the kvpm by using the apt command-line tool.

After installing kvpm, open the tool from the terminal by typing the following command. 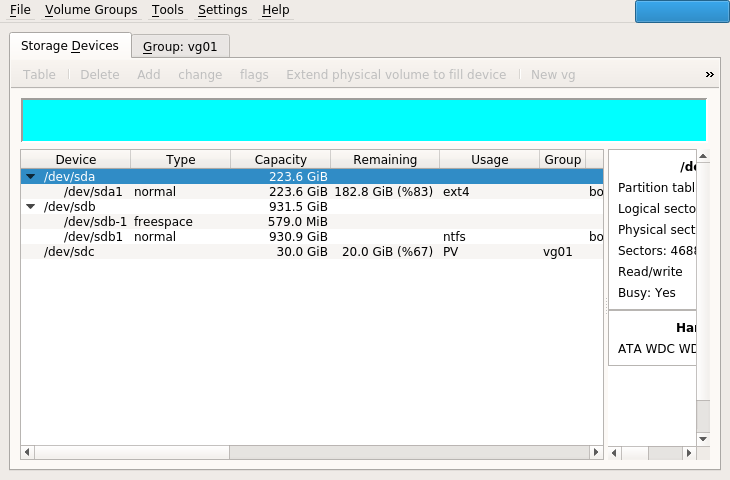 In the storage devices tab, it is showing all the block devices available on the machine. For /dev/sdc block device, it is showing 20GiB of space remaining from a total of 30GiB space because we have created a 10GiB filesystem on this block device. Alongside the ‘Storage Devices’ tab, there is the ‘Group: vg01’ tab, and it has all the data related to the volume group we created in this tutorial. 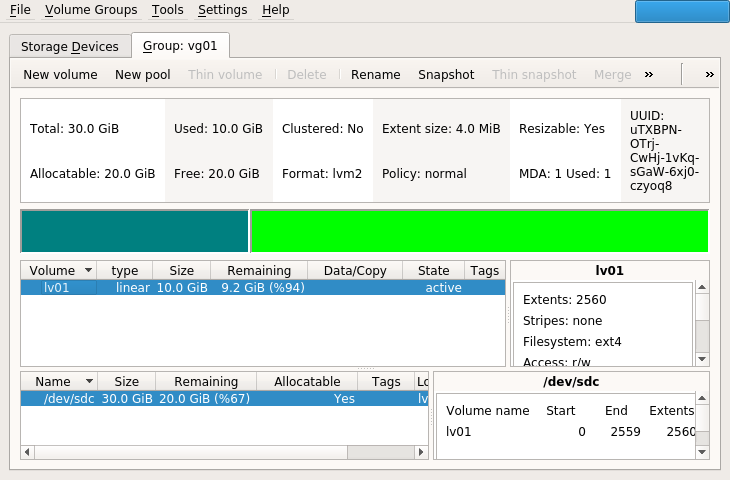 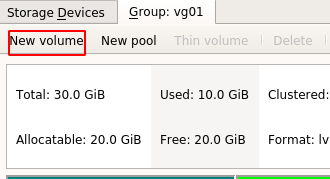 Specify the volume name and size of the logical volume. 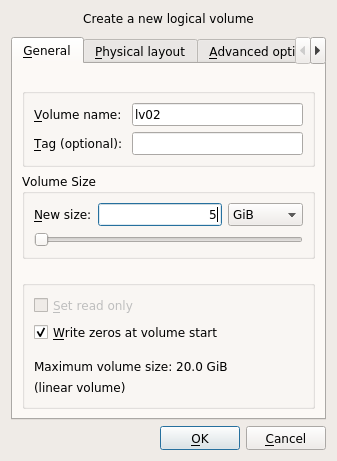 It will create a new logical volume named lv02, and the volume will be listed there.

Confirm whether the logical volume is created or not by using the lvs command in the terminal. 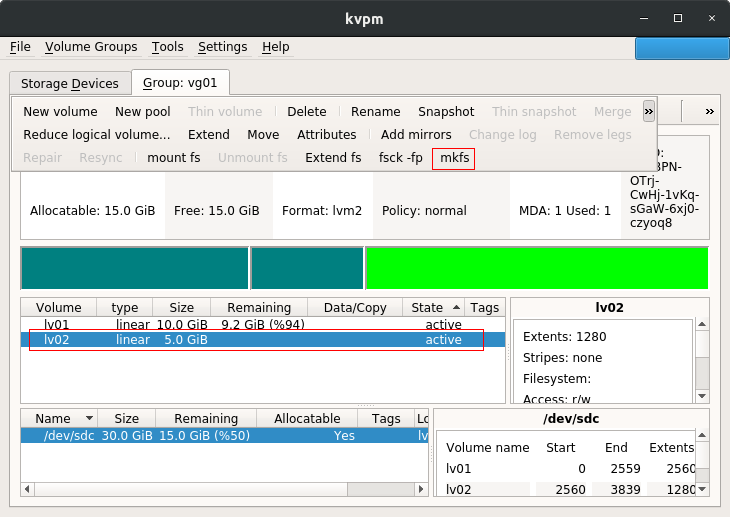 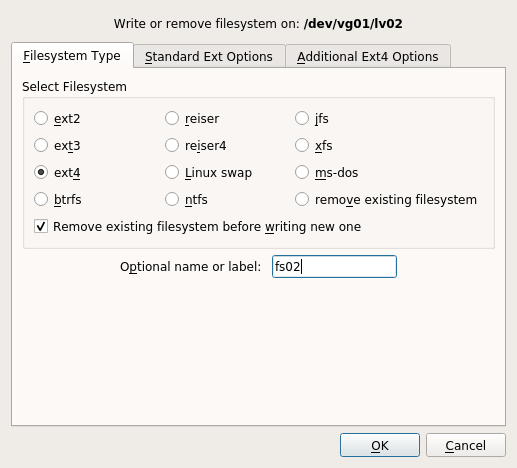 Now, this file system can be mounted on any directory and can be used to store and retrieve data.