Delete history without a trace in Linux

new August 18, 2021 no Comments
This tutorial clarifies how to delete your bash background with out leaving traces in Linux.

Your bash heritage can be viewed making use of the record command. If you operate it, all the consumer history will be exhibited as proven beneath.

By default, the bash background is found in the file .bash_heritage file found in the user’s property directory.  In my circumstance, the person is linuxhint, to see the heritage using cat I operate:

Observe: you can understand your heritage file site by working the command down below.

Deleting your record without having a trace in Linux

Deleting the command line action historical past is easy, and there are couple techniques to realize it. The to start with process takes advantage of the record command shown earlier mentioned, adopted by the -c (distinct) possibility, as proven in the screenshot under.

As you can see, following working record -c, if we operate the heritage command without the need of options again, there will not be output other than for the latest command.

Another way to take away your bash background is to get rid of the hidden .bash_background file located in the person house directory.

Given that we want to take out the command line historical past with no leaving a trace, let’s do it so that recovering the background file is impossible. To do it, we need to install the wipe instrument.

To set up wipe on Debian primarily based Linux distributions, run:

Now wipe was put in, you can securely remove the .bash_background file devoid of the possibility it will be recovered. 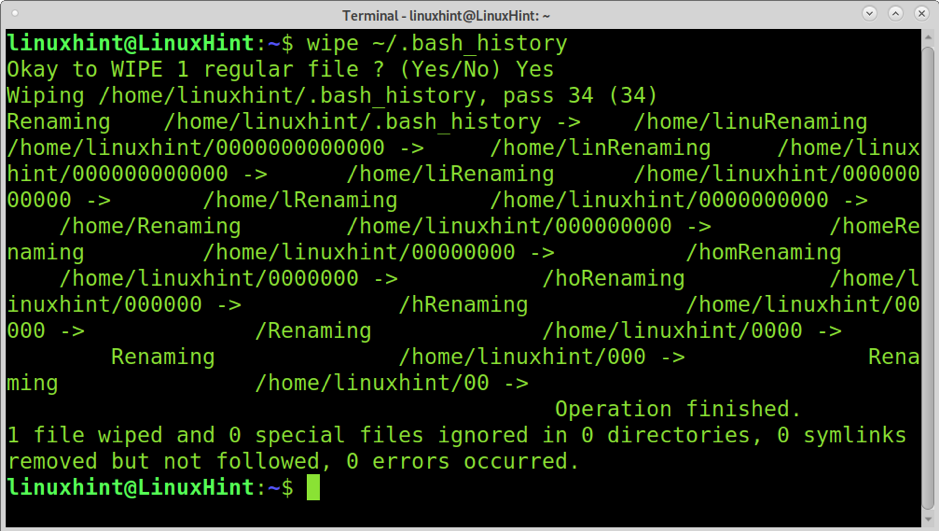 Now your .bash_history file was thoroughly wiped but will be mechanically produced again to document upcoming commands when you log out and log in back again as the similar user. At the conclude of this tutorial, you will obtain guidance to reduce the .bash_background file from recording commands.

Getting rid of a distinct line from the .bash_heritage file

Let us suppose, like most Linux users, you use the .bash_record when repeating commands, but you want to take away a certain mistake. In some instances, some people may perhaps type a password in their terminal this is incredibly insecure.

In the next screenshot, we can see 7 instructions.

As you can see, the command was eliminated, but you want to produce the modifications utilizing the heritage command adopted by the -w flag, as proven beneath.

Now the certain line you desired to delete was eradicated.

You also can remove line ranges. The next illustration reveals how to take away a precise selection of strains beginning from a certain line. The command below will get rid of 10 traces setting up from line 40. If you want to clear away a range other than 10 traces, substitute the selection 10 with the range of lines you want to get deleted. Swap the selection 40 with the line you want the line variety to begin.

Turning off the bash background

If you want to disable the bash background for the recent shell only, run the command underneath.

As you can see, just after jogging established+o background, that command was the very last recorded, which usually means no commands typed soon after that had been recorded, including the background command utilised to look at the result.

You can see if the history is enabled by managing the command underneath.

Notice: You can permit the bash record again by operating the command down below.

To disable the bash record completely, operate the command down below to incorporate the rule set +o record to your .bashrc file. The .bashrc file outlets the configuration for your terminal periods, together with the shell record, amid other characteristics.

As you can see, at the base of your .bashrc file, now you will see the established+o history rule additional. 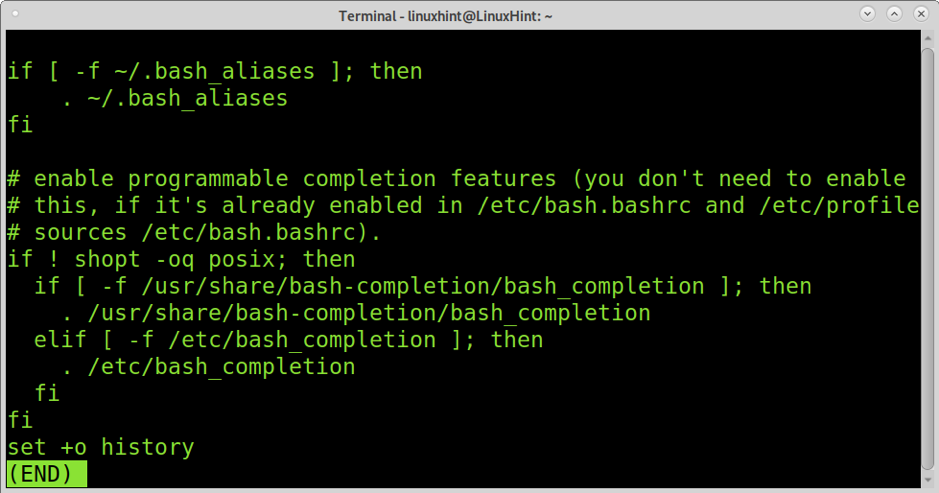 Utilize the adjustments by managing the .bashrc file as demonstrated beneath.

To disable the history for the whole technique, operate the command under with root privileges to unset the HISTFILE variable.

echo ‘unset HISTFILE’ >> /and so on/profile.d/nohistory.sh

Note: If you want to recuperate the shell activity record, you can remove the file you just designed less than /and many others/profile.d.

You also can disable the bash history for new or long term people, retaining it for present customers. To realize it, run the command down below.

To undo the past command and restore the bash historical past, you need to have to take out the set+o historical past from the /and so on/profile file

Get rid of the highlighted line (the last a single that contains the established+o record command). 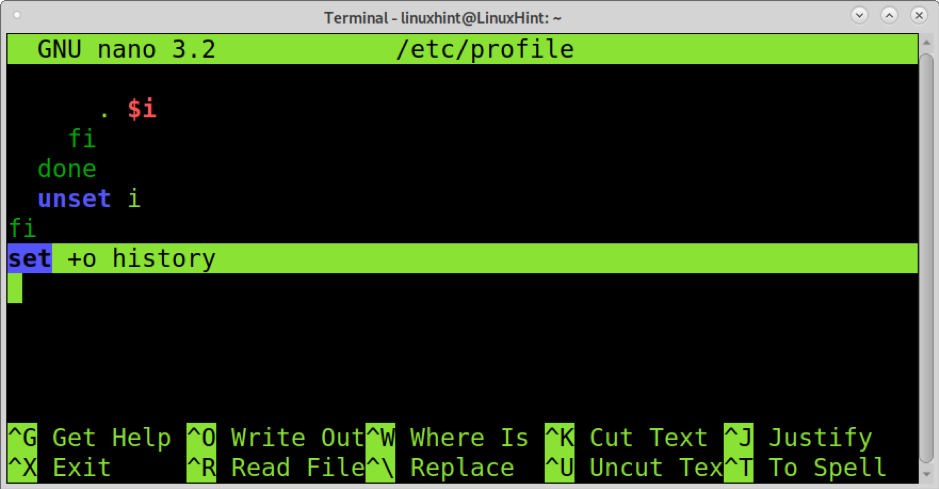 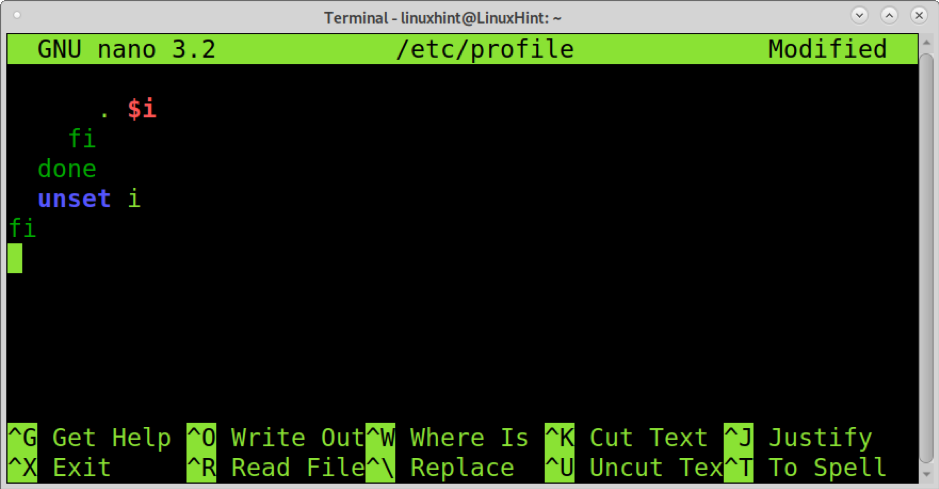 There are 2 variables limiting the bash history dimension, the $HISTFILESIZE and $HISTSIZE variables. The distinction among them is that $HISTFILESIZE defines the amount of lines that will be saved to disk and remain right after the session ends. The second variable, $HISTSIZE, defines the quantity of lines that will be saved in the historical past but won’t continue to be following you shut the session.

To see the number of strains saved in your historical past, operate the instructions beneath even after you shut the session.

As you can see, immediately after closing and logging back, my heritage will retain my last 100 instructions.

To change the variety of lines saved to disk, run the command below.

As you can see, now your background will save your last 50 instructions to disk.

Run the command beneath to see the number of lines saved even though in the similar session until eventually logging out.

As you can see, your session history data your past 500 commands.

To transform the $HISTSIZE operate:

Now your periods will retain your past 50 commands.

As you can see, taking away your bash record or certain material in just it is fairly simple, including for new Linux buyers. Knowing how to get rid of your background is especially vital when you function remotely and need to hold activity risk-free. In some instances, people might kind their passwords by error on the terminal, leaving reasonable details. In some scenarios, some directors may opt for disabling this characteristic at all. Nevertheless, the bash background is an great element that will help us repeat commands pretty conveniently by pressing a important.

I hope this tutorial describing how to delete the history in Linux with out a trace was handy. Retain next Linux Hint for much more Linux suggestions and tutorials.