The (Red)Mi vs (Real)Me battle is something we are all more than familiar with now. If a smartphone from either brand is launched, there generally is a competing smartphone from the other brand in the same price brand. Xiaomi recently released the Redmi Note 10S and sure enough, there is a Realme phone out there right in its zone, the Realme 8. Both share the same base price of Rs. 14,999 and come with a number of similar specs which is more than enough to confuse anyone looking for a smartphone in this price band. Which leads to the bitter rivals butting heads again. 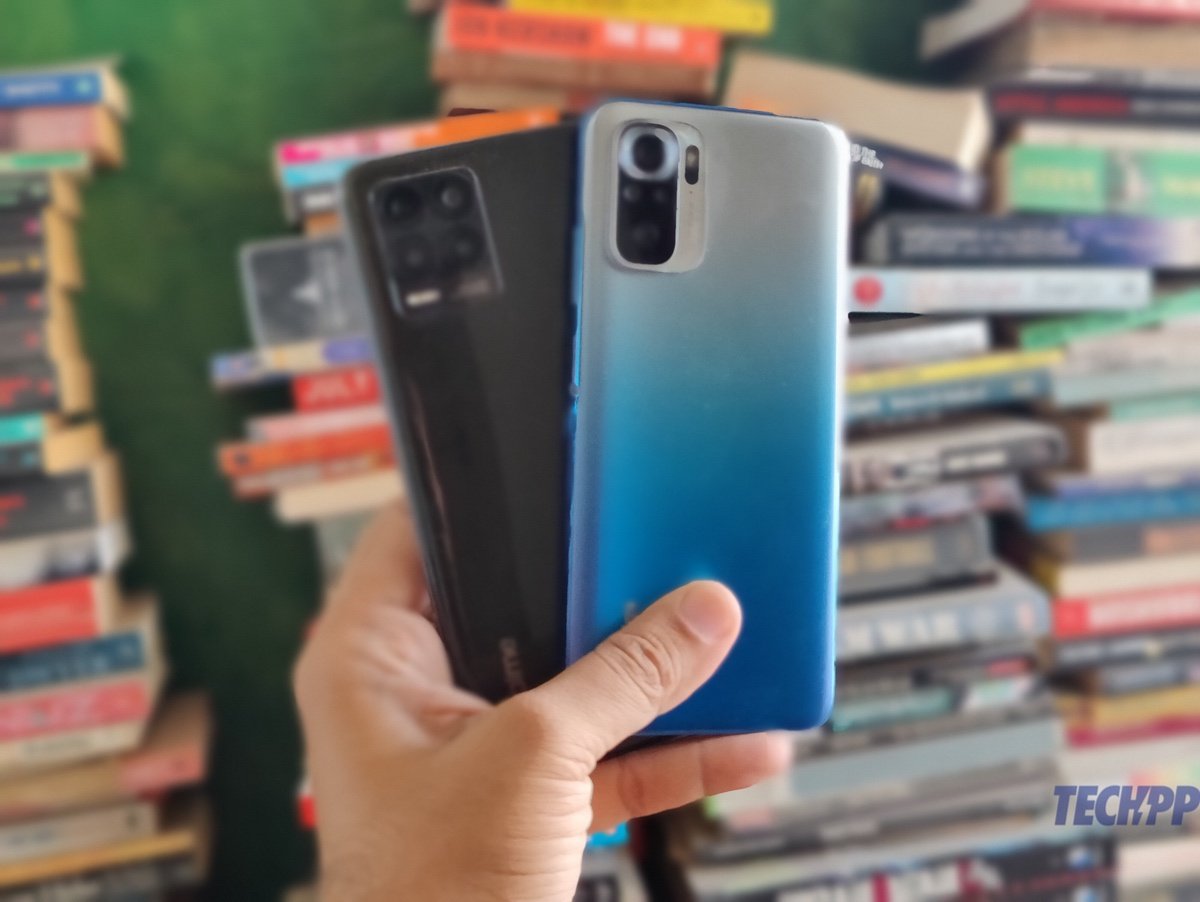 So, which Me/Mi is the one for you? Let us try to find out for Real, and ensure that you are not left in the Red. Puns intended.

Looks and design: Trendy and traditional takes on loud and proud

When it comes to looks, the two phones are poles apart. On one hand, you have a more traditional, trendy-looking smartphone that follows the popular norms of a smartphone design and on the other hand, there is a smartphone that is loud and extremely proud about it.

The Redmi Note 10S is your smartphone next door without being too boring. The device comes with a polycarbonate back that you cannot quite tell is polycarbonate by looking at it, giving it a premium, glass-y appearance. We received the Ocean Blue color of the phone which aims to mimic the colors of the ocean with a color gradient with white-ish color on the top which transitions into a darker blue as it flows south. There is a rectangular camera unit on the top left side with a big sensor highlighted with a silver border. None of this sounds like the making of a revolutionary design but it is trendy. It is a design that works and that many are already familiar with. The phone also comes with an IP53 rating, making it dust and splash-resistant, giving it an additional protective blanket. 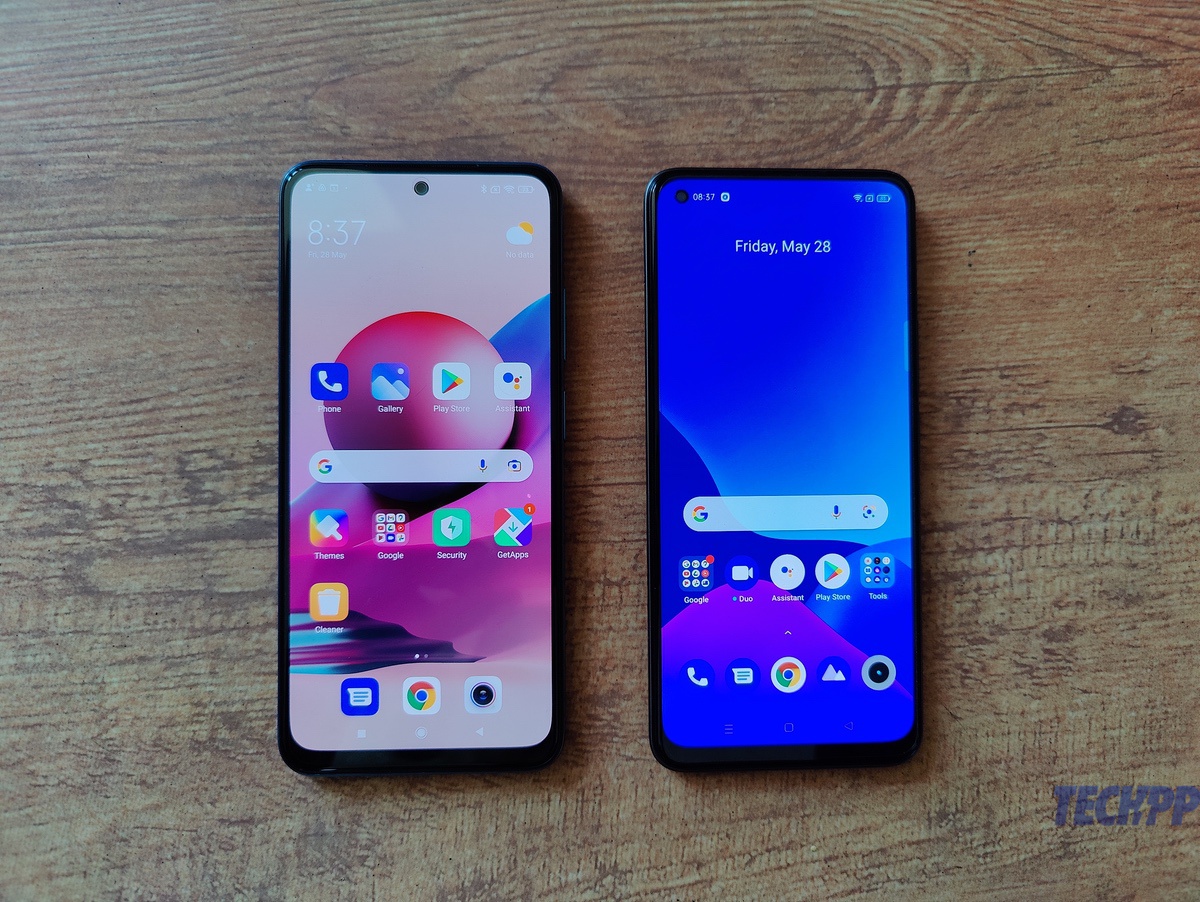 The Realme 8 on the other hand has as radical a design as it gets. The silverback of the device has an iridescent sheen and comes with a square-shaped camera unit that sits on the top left corner. But this is not the radical we are talking about. The phone has a vertical segment that is shinier than the rest of the back and carries the words, “Dare to Leap” in bold, all capital letters, making it anything but subtle. The smartphone screams for attention but is very polarising. Those who like their smartphone loud and proud would probably go gaga over it but those who believe in the “less is more” kind of ideology, might want to give it a miss.

We would go with the more subtle one of the two. The Realme 8 is just a tad too loud for us.

Hardware and performance: Game on, G95!

The appearance of the two phones may suggest that they socialize in completely different circles but at the core, they are basically two peas in a pod. Both phones are powered by a MediaTek Helio G95 processor which may be old but is known for its gaming performance. 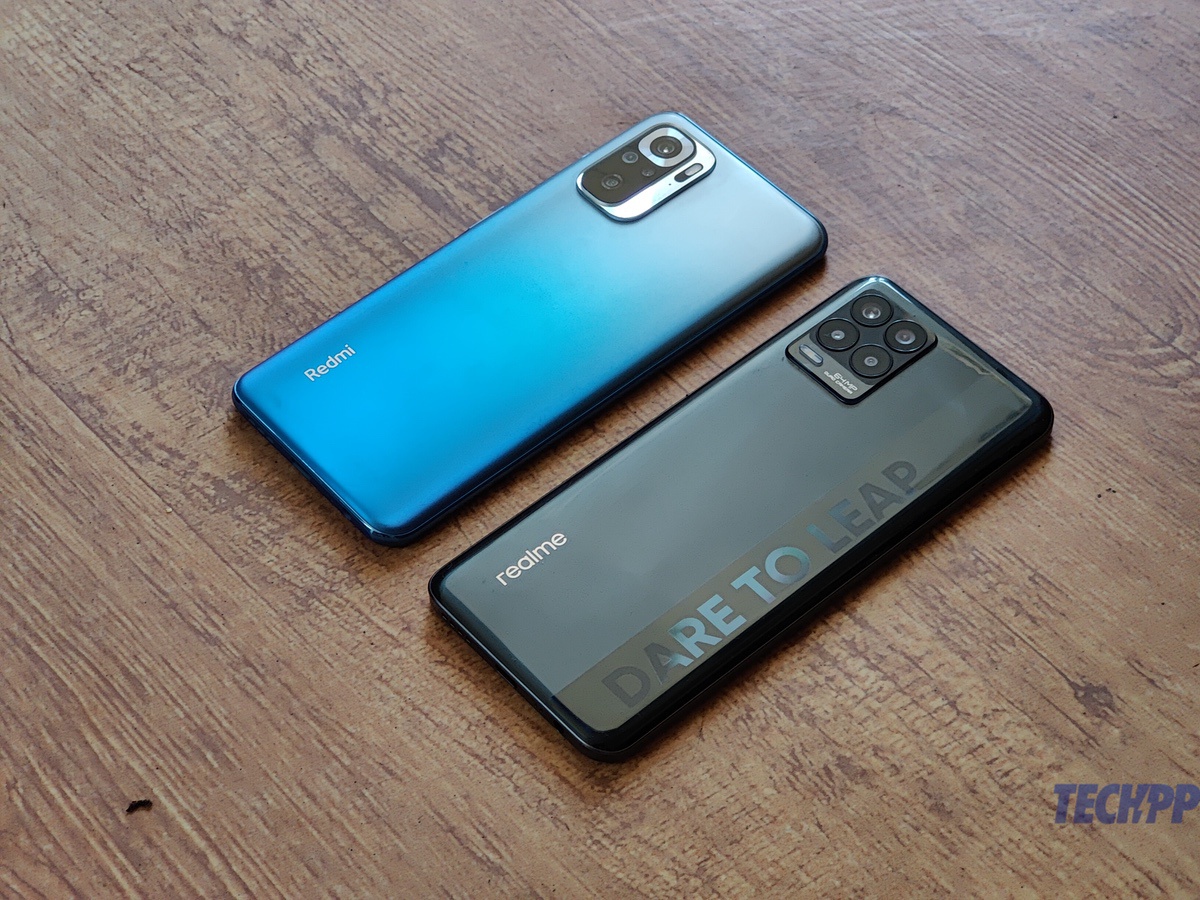 That said, there is a different approach that the two brands have taken in the case of RAM and storage. The Redmi Note 10S comes with more RAM with the base variant coming with 6GB RAM and 64 GB onboard storage. There is another variant of the Note 10S which brings 6GB RAM and 128 GB storage to the table.

The Realme 8 on the other hand comes with 4 GB RAM and 128 GB storage in its base variant. There are two more variants available that come with 6 GB/ 128 GB and 8 GB/ 128 GB options. Storage can be expanded on both the smartphone via microSD card but the Redmi Note 10S comes with UFS 2.2 storage while the Realme 8 has UFS 2.1, which is a little slower.

The story remains the same when it comes to the displays of the two devices. Both Redmi Note 10S and Realme 8 bring a full HD+ AMOLED display to the table. The Realme 8 has a 6.4-inch display while the Note 10S has a hair-thin edge with a 6.43-inch display. Both phones come with a punch-hole display but with different placements. The Realme 8 has the selfie camera on the left side while the Redmi Note 10S carries it in the center. 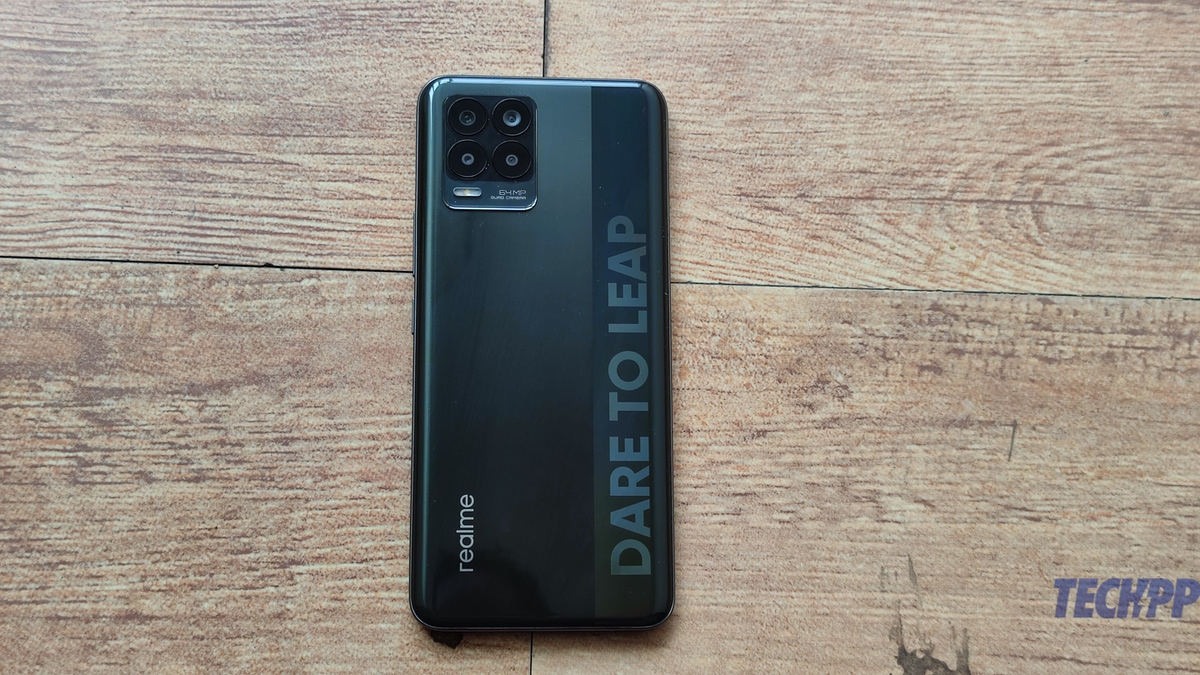 With broadly similar hardware, the two phones are pretty much on par when it comes to day-to-day and pure gaming performance. Both can handle your everyday chores, casual gaming needs with ease and both are impressive when it comes to high-end games. No, they are not knights of pure speed, but they do offer a largely glitch-free gaming experience, which is impressive at this price point.

While the two phones seem largely the same, we have to side with the Redmi Note 10S as the overall performance and experience of the device is just a bit better than the Realme 8 – that extra RAM in the base model and the faster storage perhaps make a difference, the stereo speakers definitely do, and that fingerprint sensor unlocks faster. 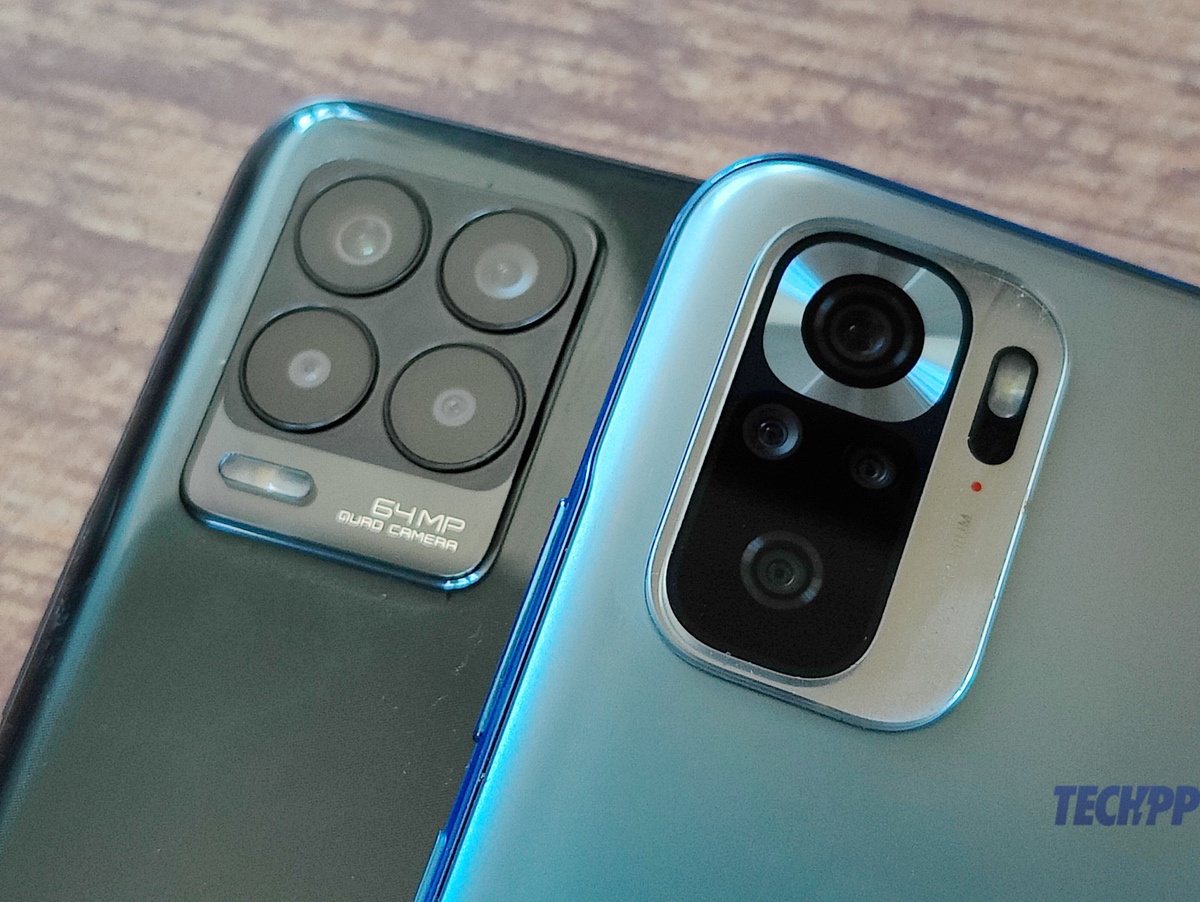 Just like the processor department, there are more similarities in the camera department than not. Both smartphones come with a quad-camera setup and both have the same megapixels on all four sensors. There is a 64-megapixel wide main sensor, an 8-megapixel ultrawide sensor, a 2-megapixel depth, and a 2-megapixel macro sensor each. The Realme 8’s main sensor does come with a slightly larger aperture but that does not really draw a distinct enough line between the two camera setups. The only major difference in the numerical comes forth in the selfie camera department where the Redmi Note 10S comes with a 13-megapixel sensor while the Realme 8 brings a 16-megapixel front-facing camera to the table.

In the rear camera department, both smartphones perform pretty well in sufficient light conditions. The main sensor on the two smartphones manages to capture a lot of detail. The Realme 8 has a slight edge in the color department as it tends to reproduce color better as compared to the Note 10S. The Realme 8 also has slightly better low-light performance. That said, the Note 10S scores in the video department. The ultra-wide sensor on both devices works well and will be able to fulfill most of your landscape desires while both macro and depth sensors are not too impressive. Video performance on the Note 10S, with the Realme 8 being a little shaky, but the difference is not easily discernible.

When it comes to the front camera, the Realme 8 not only scores in terms of numbers in the front camera department but also in performance. It delivers more colorful and detailed results as compared to the Note 10S which often produced slightly bland selfies.

There is not a massive difference between the camera performance of the two but the Realme 8 has a slight edge with better low light performance, better color reproduction, and a superior selfie camera. The Note 10S’ camera works a little faster than the Realme 8, 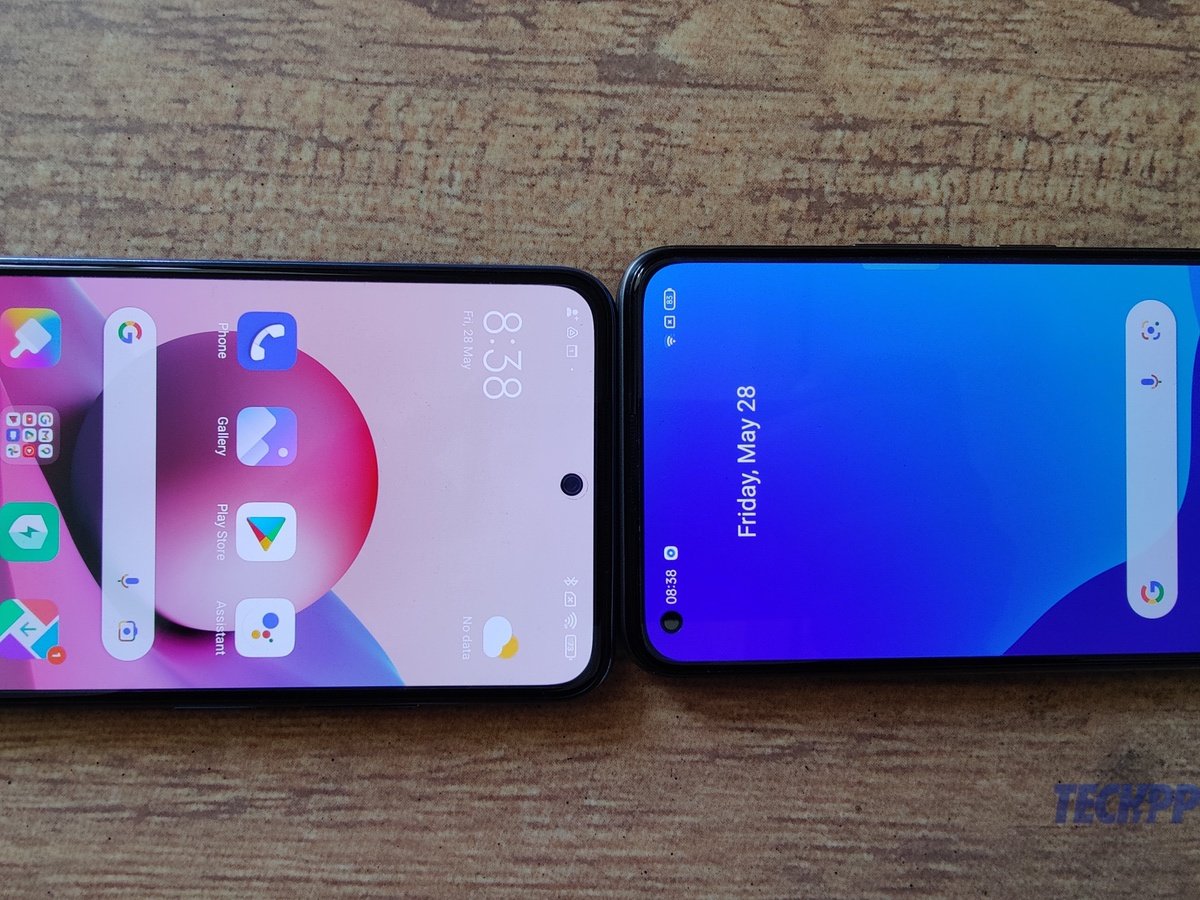 We are big fans of a clear, easy, uncomplicated UI, and with the Redmi Note 10S, Xiaomi released the MIUI 12.5 version which the company claims is their cleanest skin yet. It is almost completely bloatware-free and does not seem to have ads which were a pain point in the brand’s UI story. But now that Xiaomi has dealt with it and still manages to be the feature-rich UI that it is known to be, gives the interface an upper hand. No, this does not mean the Realme UI is bad. It is good and efficient but is not on the same level, and looks very cluttered in comparison. 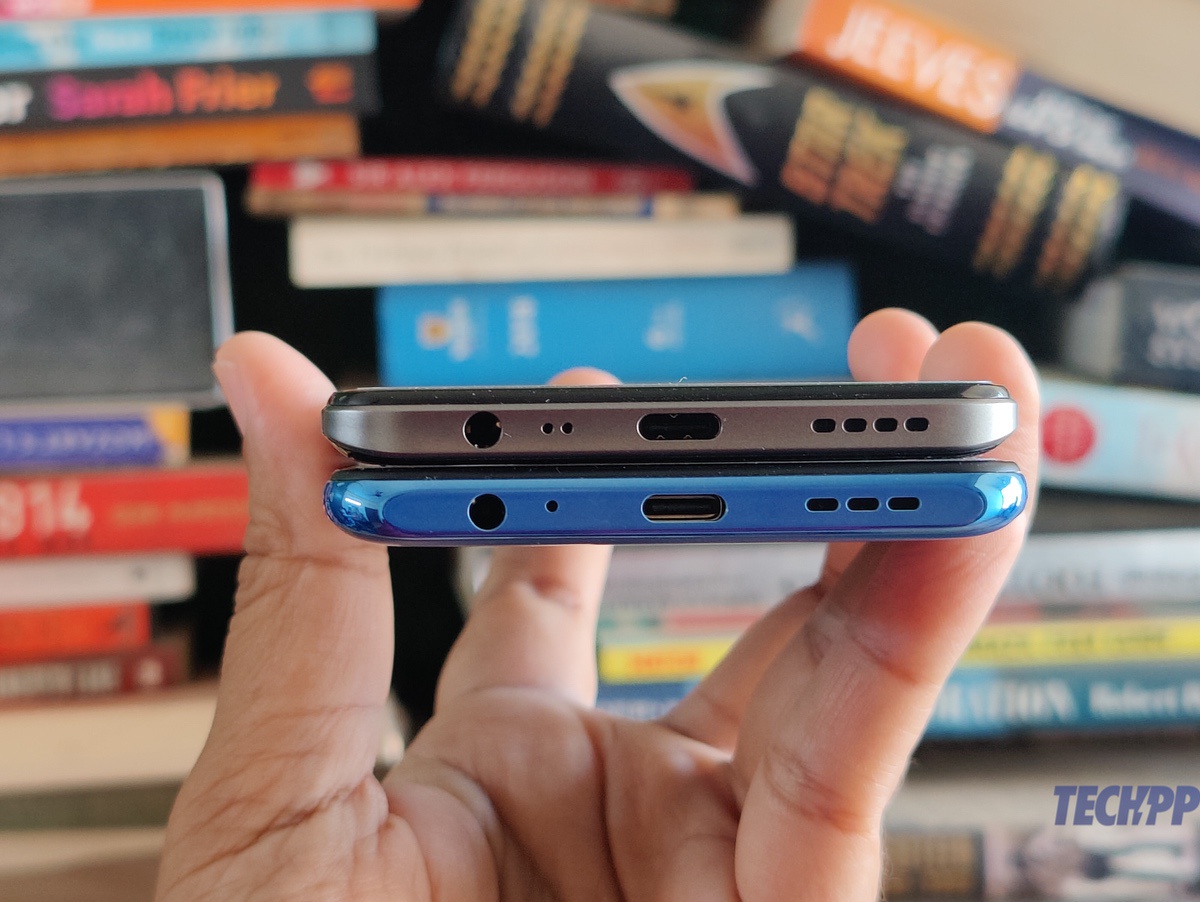 Much like other segments, the two phones are placed shoulder to shoulder in the battery department as well. Both come with a 5,000 mAh battery each which can easily see you through a day and then some on a single charge. The difference lies in their charging speeds. The Realme 8 comes with 33W fast charge support, while the Redmi Note 10S comes with a 30W fast charging support. The difference is not massive in both numbers and performance but the Realme 8 does tend to get charged up a teensy bit faster. 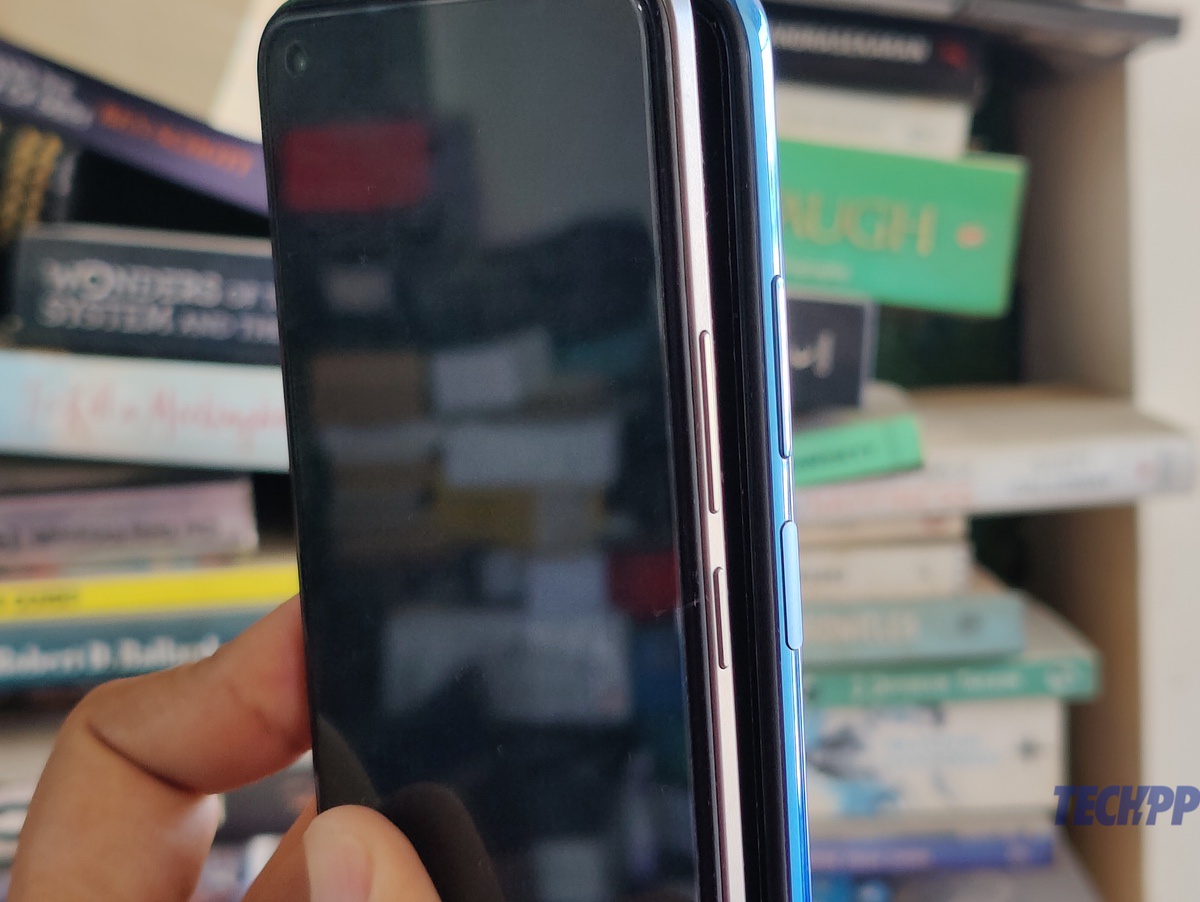 With so many common numbers and features, it hardly comes as a surprise that the two phones have the same starting price of Rs.14,999. But their configurations are a little different. The base variant of the Redmi Note 10S comes with 6GB RAM and 64 GB storage while the base variant of the Realme 8 comes with 4 GB RAM and 128 GB storage. Both devices have a 6 GB/128 GB version priced at Rs. 15,999. Although that is the top variant of the Note 10S while the Realme 8 has another version which comes with 8 GB RAM and 128 GB storage at Rs. 16,999. We think having more storage is not that big of an advantage on the base variant because the two phones come with expandable memory support and the extra RAM on the Note 10S obviously is a bonus factor there. However, the fact that Realme 8 has an 8GB RAM variant only for a thousand rupees extra makes it a tough round. Hence we are calling it a tie.

Verdict: Keeping it real, or painting it red?

The number game clearly announces the Redmi Note 10S as the winner of the face-off – while the Note 10S does win in looks, UI, and performance department, the Realme 8 managed to bag the battery and camera rounds. But the difference is actually not that great because two of the rounds, looks, and UI, that the Note 10S wins, are based on very subjective choices. That said, the Realme 8’s win in the battery department is wafer-thin. See how closely matched these two are? Even the prices are broadly similar. 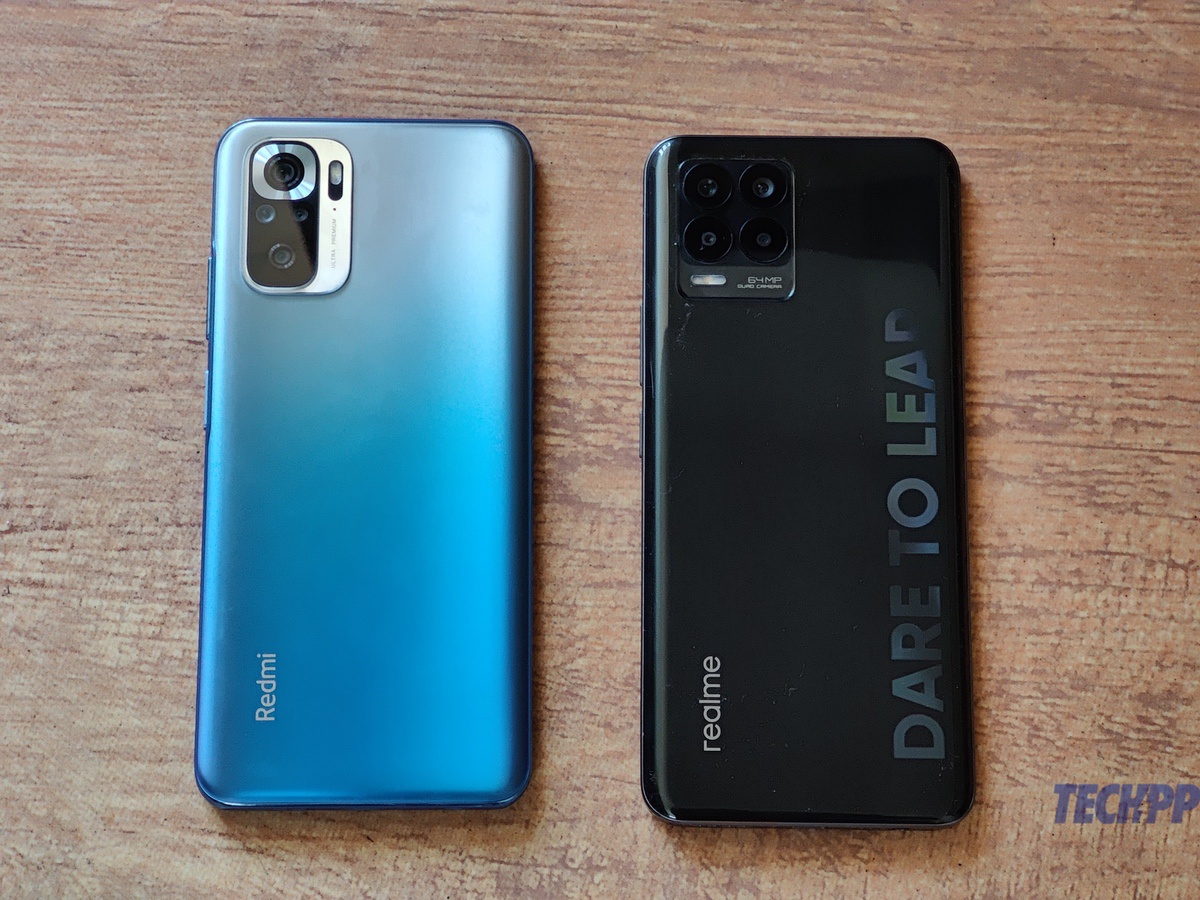 Which phone suits you best depends, as always, on what you are looking for. And while it gives ground to the Redmi Note 10S in more parameters, the Realme 8 is a contender in its own right. Indeed, if the camera, battery, and standout loud design are what you seek in a smartphone, then the Realme 8 could be your pick.

We however are slightly more inclined towards the Mi with the Red, the Redmi Note 10S, simply because of the clean design, the better overall performance (the speakers make a difference), and the new clean, uncomplicated MIUI.

The Mi in the Red corner wins, Really.